Bill Cunningham is from the rural Midwest. His small town high school graduating class was only 36 students. He prides himself on that upbringing of traditional values which gave him an innate service heart.

His father, Bill Sr. expected that every driveway of a senior citizen in the neighborhood be shoveled by his six sons, and sometimes the three girls, without expecting a reward. 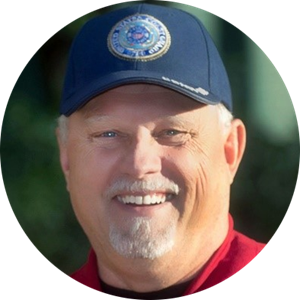 Bill launched his adult life adventure in the United States Coast Guard. He served in various posts including that of a lighthouse inspector for offshore lights in Southern Maine. As part of an inspection crew he found flying out to the lights was especially exciting and harrowing at times. Bill found the solitude of the keeper and his typically young family was interesting and at times, troubling. Today, all the lights are automated.

His favorite duty was being part of permanent crew aboard the USCG Barque Eagle, a tall ship stationed at the Coast Guard Academy where he learned 17th century sailing techniques. In addition to his regular shipboard duties, he worked some 15-stories aloft in the rigging, at times in heavy North Atlantic seas. Later he continued to enjoy the challenges of being a professional tall ship sailor and was named Commodore of Friends of Argus in Newport Beach some years ago.

After leaving the Coast Guard, Bill had a satisfying 35-year career as a Nationally Certified Paralegal, often being asked to mediate complex cases. He learned that conflicts can most-often being broken down into a very basic misunderstanding that unfortunately ballooned into litigation. Finding and resolving that initial rift often resulted in resolution.

Today, Bill is a Council-certified Emergency Operations Professional and the CEO & Developer of BERT (Building Emergency Response Teams), an organization devoted to OSHA compliance and FEMA principles, saving life and limb by alleviating fear. There is no greater reward than to receive testimonials of how injury rates have decreased at a client’s high-hazard facility, or how an individual has helped in a crisis with poise and resolve.

Bill has had a life-long passion for serving his country, community, and veterans’ organizations. He is currently the President of the Orange County Chapter of the US Veterans Business Alliance. Its focus is helping veteran business and disabled business owners take their venture to the next level. He has also recently been a volunteer for the Veterans Outpost at the Orange County Rescue Mission and has served as a theological committee member of the Orange County Veterans Collaborative.

In addition to his veterans work, Bill serves on the Executive Committee and Board of Directors for Leadership Tomorrow OC and is active at his church which meets at the Newport Sea Base of the Boy Scouts of America.

Bill lives with his wife, Holly, in Orange, California and enjoys being a dad to his grown children and granddad to his growing number of active grandchildren.