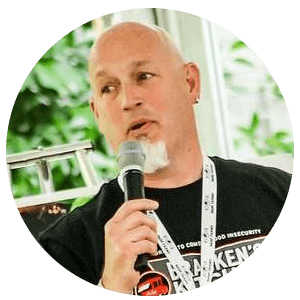 I had no idea. Literally no idea, about the impact that my decision to create and start Bracken’s Kitchen would have on so many people. I guess there are a lot of people walking through life wondering if there isn’t something more. Something more meaningful, something more heart felt or just something more that they should be doing. “What is the meaning of life?” is a question that has been asked for generations. After all, deep inside of every one of us is a longing and desire to know that in some small way, it has made a difference that we have lived.

People often ask me about the decision I made to walk away from a successful career as a semi-celebrity chef to feed the homeless and less fortunate. I certainly couldn’t have chosen a new career path with more of a contrast from my past life. I have gone from feeding celebrities, movie stars and presidents to feeding street people and the working poor in our communities and I have never been happier. God has truly blessed me through this.

While I know it is common and cool for sports stars to point up to God when they do something great on the field of play but in my case my story is pretty simple, God truly did for me what I couldn’t do for myself.

You see, I was always a slave to money. Not because I needed fancy things, but because of the immense fear and insecurity in being able to provide for my family. I attribute this to the time in my childhood when my father’s company, ironically Seitz Foods, was on strike and he was not working. My bedroom was closest to the kitchen and I remember lying in bed at night while mom and dad sat at the kitchen table trying to figure out how they would get by.  They worked so very hard to ensure that we kids had all that we needed and never went without but those times were very tough. There were lots of nights when dinner was a slice of white bread and some soup poured over the top, i.e.: SOS, “Stuff On a Shingle”?

I believe it was that time in my life that created this immense pressure to be able to earn a decent living and provide for my family that drove me. That and the desire to make my father proud of me. I am not sure how a country boy from a town of a little over 1,000 people ended up in Beverly Hills but I did. Along the way I got caught up in the career rat race. After all, I lived in Southern California and worked in Beverly Hills and Newport Beach for more than 25 years. What you wear, what you drive, where you dine and who you hang out with was the world I worked in. A world driven by success which was defined by the size of your bank account. Don’t get me wrong, there is absolutely nothing wrong with success and wealth, but when the drive and desire to achieve it blinds you to what is going on all around you, there is a problem.

I got caught up in that to some degree and lost my way. My focus on my own success and fear of providing for my own family caused me to have a blind eye and lack of compassion for those with so much less. That drive to succeed and make dad proud fueled me and was my only priority.

When our economy took a huge hit in 2008 -2010, I watched a lot of really good people lose their jobs. While the place I was working was still making a profit and doing okay, friends were let go and struggled to get by. And I mean really struggled. There were no jobs to be found. To see a grown man with a wife and 2 kids not be able to buy their child a Christmas present and barely put a meal on the table — that affected me. I knew then that I was being called to serve and help, but didn’t know how and quite frankly, was too afraid. I was tasked with unbelievable expectations, and out of fear for my own financial survival, put my head down and did what I was asked. I became detached and unfazed by the struggles of the people who worked for me. I was too worried about my own future to worry about theirs.

Then the unthinkable happened. At 48 years of age I was fired for the first time ever. I was walked off the property like a common criminal and thrust into the lines of the unemployed. The fear, shock and dismay of being unemployed didn’t last long at all as I knew it was my calling. Losing my job in December was truly one of the bigger blessings in my life. I got to enjoy Christmas off with my family for the first time in my adult life. I was invited, and actually able to attend, a New Year’s Eve party. I have never been to one before then. I was always cooking. What a blessing!

While I struggled with many fears and emotions of being a 48 year old unemployed chef, I knew it was part of a bigger story. The real fear was that my profession was a young man’s game, and here I was — old and out of work. In spite of the stress of it all, it was truly an immense rebirth of sorts. No longer was I a slave to corporate America — I was free. I highly recommend it to anyone caught in the corporate whirlpool!

Soon after my departure I received many calls from people wanting to put me to work.  Moving was out of the question, so I settled on a local project. While I truly wanted to focus on feeding the less fortunate, I again got caught up in the money hustle with an investor who wanted to open a dozen restaurants. Needless to say that project was a complete failure and there was no doubt then that I really needed to figure this feeding the less fortunate thing out.

I worked on a concept and built a business plan around a restaurant that would give back. I worked on several consulting projects to pay the bills. My wife was a trooper through it all and worked hard to help keep our family above water, financially.  When I lost my job, she was a stay at home mom raising our 2 year old. God truly blessed me with her and her willingness to do whatever she had to in order to help me make this happen.

As I look back now, all of my early efforts and ideas had a common thread. I was desperately trying to hold onto that former life in luxury hospitality. Little did I know then, that deep inside it was my ego that was fueling this need. As I tried many different things, even starting a Filipino Pastry concept, the only thing that gained traction was Bracken’s Kitchen. Now I have to ask you — what does a redneck country boy from Kansas know about Filipino Pastries? –but still I tried.

When we finally landed on the concept that came to be known as Bracken’s Kitchen, I started the tedious work of getting our 501(c)(3) status and building out the plan. We found out in the fall of 2013 that our application was approved and suddenly we were a bona fide nonprofit. I was knee deep in a couple of consulting projects so Bracken’s Kitchen got moved to the back burner until early 2014.

It was in the fall of 2014 when I came to the hard realization that if I was ever going to make this thing work then I needed to focus on it full time. I think that was one of the hardest leaps of faith. To walk away from all sources of income to focus on this and not take a salary was scary but needed.

It was as if God was saying “About time!” It was only then that things started to fall into place. Betsy ended up on our doorstep in December of 2014 as a gift from Bruce Hecker of Bruce’s Catering and that one simple act forever changed our course. No longer was 2015 going to be a year to fundraise and buy a truck. Suddenly we had one, and off we went. Our fist feeding event was at Voice of the Refugee even before we had Betsy, and once we got her, we started feeding people and never looked back.

Bracken’s Kitchen looks vastly different today and we are excited about our future but it all truly started when I made the big, hard and scary decision to just do it.