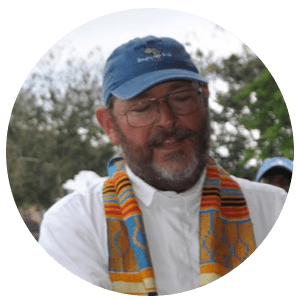 When Richard Ward approached me to write a column about myself for successwithpurpose.org, I was flattered, amused and hesitant. Richard has been my financial advisor for three decades and my BFF for nearly half a century. There was no way I could say, “No, thank you.” And so I write.

Since early childhood, I knew that I would be an Episcopal priest, a US Senator, or a Supreme Court justice. At age 20 I looked under the hood of politics and scratched the goal of being a Senator.

I was a very successful collegiate debater and public speaker, winning national awards. Law school and the path to the Supreme Court was there… I love constitutional law to this day, and would gladly accept appointment to the Supreme Court (watch out, Citizen’s United!), but the phone call has yet to come.

The call which did come loud, clear, and repeatedly was to be ordained an Episcopal priest, which happened in 1984. I suppose the rest of my life has been a feeble attempt to be faithful to this calling filled with purpose. Success for a priest has a very different matrix than in business, though my future business success is as much attributable to the values ingrained in parish ministry as anything else.

Episcopal clergy is encouraged to develop for themselves a personal BHAG, a Big Hairy Audacious Goal. The concept comes from the Harvard Business School and is intended to different companies with intergenerational success from the 99.9% of companies which rise and fall like blades of grass.

A proper BHAG requires that you do NOT have the resources available or the means to acquire the resources to achieve your Big Hairy Audacious Goal. It requires the ability to look over the horizon and imagine what lies ahead. This certainly applied to me. With a salary of $21,800 and no inherited wealth, I had no financial means to achieve any goals involving money. But I did have the social capital of Church and family to support my vision, and this was invaluable to keep alive the spark. It would take more than a decade before I made my first visit to Ghana, West Africa.

My BHAG emerged from a series of dreams while studying the life story of Albert Schweitzer as part of preparing a sermon. In my dreams, I was told to help Africa. I embraced these dreams as a message from the Almighty and began a quest for this purpose. It took almost 10 years to visit Ghana, West Africa for the first time, to formalize my BHAG while on a retreat. Once there, my call to “Help Africa” was crystallized and my BHAG launched as I put to paper and a support group two specific goals: establish and fund a pension program for indigenous clergy in the rainforest of West Africa and bring safe sustainable drinking water to 250,000 souls.

As my commitment to Africa grew, I came to discern is that while my parish endorsed my vision to help African villages and local priests living in extreme poverty (their wages were $100/year with no retirement!) the call to serve Africa was mine and not the parish’s. To achieve my BHAG I would need to find a way to make money, more money than I imagined I could ever do.

I started by establishing a foundation and opening myself to leaving full-time parish ministry for the world of business. Scary and exciting! The opportunity came in 2004 when I was offered to run a privately held utility that was in bankruptcy. Not a great prospect, uh? But it was. In addition to a sudden income of $100,000 (nearly unheard of for a parish priest,) I ultimately received a controlling stake in the emerging company. Over the next 10 years, we grew the company from $2,000,000 in revenue to almost $30,000,000 and became quite profitable. It was not a straight line growth chart. I went for a year without receiving any compensation during the Second Great Depression and was within days of losing everything before landing a large job thanks to the Obama Administration’s public works initiative. We weathered the recession and came back roaring. The company became my BHAC’s primary funding source as I was able to pour over $2,000,000 into African water projects, community development, and a clergy pension fund which we created out of thin air. I had crossed over the horizon and discerned the path to accomplish my charitable life goals.

I ultimately sold controlling interest in the company and established a charitable trust so that my personal needs were met in my lifetime, and the BHAG would have the needed financing in the next generation. Others who were part of this business venture established charitable trusts to support my BHAGs down the road. I’ve grown to embrace the African adage, “If you want to go fast, go alone; if you want to go far, travel together.”

Having sold my business interest, I became restless and have invested in more businesses. They are small today, but they still provide the funds to enable our projects to move forward.

2018 is the year in which my first BHAG reaches its milestone—the clergy pension scheme will be fully funded for current clergy and new clergy are now part of the country’s social security system. Yes, this is a 20-year journey with so many challenges that ultimately became a success. Who’d have thought?

I have a long way to go toward bringing water to 250,000 souls; but in large part, a new national public water program in Ghana has accomplished the goal for me.

The call to Help Africa continues to burn. In 2014 I took on a new BHAG, freeing 1,000 children from slavery in Ghana. You can learn more about our efforts as abolitionists at AbolishSlaveryNow.org. Again, I haven’t the resources, but for this BHAG, I am part of a wonderful team of volunteer abolitionists. In March 2018 we crossed the mark of 100 children rescued from slavery through our fundraising and work with a great Ghanaian NGO. If we can match our vision to supporters with a couple of million dollars, we will have the funds to realize our goal. I really hope to realize this BHAG in my lifetime.

Nurtured by family and friends, I am busier today than ever before, though it is my own making. Simply put, I work for Africa, attempting to succeed in business so that I might achieve my BHAGS. I suspect that it will always be thus for as long as God grants me vision and breath.

In the words of Dag Hammarskjold, “For all that has been, ‘Thank you.’ For all that is yet to come, ‘Yes!’”