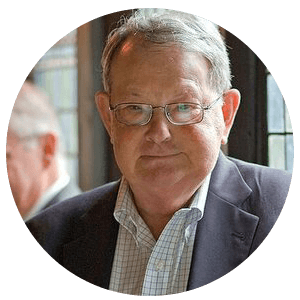 Stan Hinden, a Washington Post business journalist, passed away recently at 90. In an obituary tweet, columnist David Ignatius wrote, “In addition to his column for [our Washington Post] Business section, Stan wrote a wonderful book called ‘How to Retire Happy.’ He did.”

I think they’ll be able to say that about me, too.

I retired nearly ten years ago as an investor relation executive at a local New York Stock Exchange medical device company following more than 25 years as a marketing communications practitioner in an Orange County pharmaceutical company.

Since then, I have employed my marketing communication experience in the not for profit sector donating my time and travel trying to pay back the blessings and grace that I received during a forty plus year career in the private sector.

Here in Orange County, I have served four three-year terms on the church’s governing body, one as its leader, one as its second in command, and two as its communications director. While the resources available and decision-making process are much different from those in the private sector, we have somehow managed to enter the 21st century with our communication efforts – but only recently. While I am on the governing board –we call it the Vestry in the Episcopal Church – I tend to spend two to three hours a day with my assigned tasks. I mostly work from home remotely connected to a computer in the parish which lets me complete my work – except for meetings, of course – by walking into my home office.

This remote connection also allows me to work at the local parish from Seattle where my children and three grandchildren live. I’m spending three or four months of the year there living in a condominium that’s reasonably close to both families.

About two years after I joined the local parish in 1998, our minister introduced me to a friend of his who was developing a support group for the archbishop of Canterbury called the Compass Rose Society. (The mariner’s compass rose is the logo of the Communion signifying its reach throughout the world. The Anglican Communion is the fourth largest Christian communion with 85 million members, founded in 1867 in London, England.) Shortly after this meeting, I joined the Society, and our parish followed. I went to my first Annual Meeting in London in 2002 and have attended ever since.

At first, I just watched and listened trying to understand the Society’s work, but eventually, the board asked if I could help with their communications and I continue to do this today. We publish a newsletter once or twice a year depending on the budget, and with a membership of about 400 Anglicans located primarily in the US, Canada, and Hong Kong, we are heavily involved in social media which facilitates our communication. And of course, there are the solicitations for contributions and new members, church conventions, an annual report, and other occasional member outreach notices. I probably spend at least eight hours a week on average doing this work.

One of the highlights of membership in the Compass Rose Society is the opportunity to travel to Anglican dioceses throughout the world. Most years, following the annual meeting in London, we visit, at the invitation of the local archbishop, a diocese in one of the 39 provinces of the Communion, to share fellowship with other Anglicans and visit diocesan projects which need support. We also take study trips to learn more about the Communion and its history. Over the years we’ve made about 20 such visits with the highlights being those to Africa (Nigeria, Tanzania, Ghana, Southern Malawi, and the Province of Southern Africa), Jerusalem and the Holy Land, and Hong Kong and Mainland China.

When I retired from my investor relations job, I was admittedly a bit disoriented and concerned about my future. Finding opportunities to move my communications experience into the not for profit sector has brought a different and refreshing focus. I stay busy, feel that I am “giving back”, and can still spend time with my children and grandchildren on my own schedule.