Penny Lambright is the founder of the non-profit organization, “Patriots and Paws” in Anaheim, California. Lambright collects used household items and “sells” them to vets. She invites them to “shop” at a warehouse, but no money is required because everything is free. Her vision and philanthropic way of thinking have truly changed the lives of thousands of veterans in Orange County. 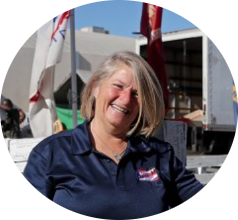 Lambright is no stranger to military life and the effects of war. She was the daughter of a U.S. Marine whose father had fought in WWII and the Korean War. As the youngest of five siblings, she was often known as a take-action kind of girl, a trait that has certainly followed her throughout her life.

Lambright started “Patriots and Paws” in 2011 after receiving a $125,000 inheritance. At the time, her nephew had just returned home from his second tour of duty in the Middle East. When he came home, he told his aunt how his fellow soldiers were coming home with nothing and needed help.

At the time, she was running a professional company but began to collect items for veterans in her spare time. She used her inheritance to rent a storage unit, which quickly filled up. She rented another, which quickly turned into six due to the overwhelming support and response. That’s when she moved the organization to a warehouse in Orange to store all of the donations and provide a larger area for the veterans to shop.

She later called the warehouse her home after giving up her rental in Orange. She stayed there for a while but has since moved to Tustin.

Despite the COVID-19 pandemic, Lambright’s organization has still flourished as it continues to collect donations and help vets in need. She has helped more than 8,000 vets get the necessary supplies they need for their homes.

Bringing Pets and Vets Together

Besides having a love for helping others, Lambright also has a love for animals. This is why she works to pair rescue dogs with vets. That’s where the paws part of the organization comes in. She believes animals can help humans in a difficult situation just as much as humans can help animals.

Although Lambright is plenty busy working with animal rescue groups, running the organization, teaching a class at Cal State Fullerton, and still running her professional company, she still finds time to spread joy to others.

She has also created a “Leave Your Burden Behind Wall” near the warehouse. This is a fence she built out of pellets where vets are invited to write a message. They are encouraged to write about any burden that is bothering them and to leave it on the wall. This is a way to let go of any problems that people may be facing.

Lambright’s investment in the community goes far beyond using every penny of her inheritance to start Patriots and Paws. Her selflessness, vision, and desire to help those in need are an inspiration and model for others in Orange County and beyond.

You can learn more about Patriots and Paws and how you can keep Lambright’s vision alive, here.